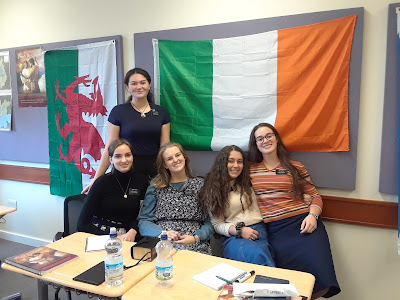 This week has been so crazy but it has been so good. I love it here so much I am going to cry like a baby when I leave. I can't believe I've been here for 2 weeks. The days here go by so slowly, but the weeks just fly by. It's the weirdest time conundrum thing. But for real I love it here. It can be super hard and sometimes frustrating, but it's so amazing here. The Spirit here is so crazy strong and just so powerful it's unreal.

As I just mentioned, the weeks here are decent so I'll just give you a nice bullet-point list of the most exciting things that happened this week.

1) On Thursday, Sister N and I woke up to the sister training leaders next to our bed sniffing all over our room. One of the weirdest things I have ever seen and for real thought I was dreaming. When they saw that we were awake, they told us that they smelled something that reminded them of burned rubber and they weren't sure what it was. We then offered to go around and help them see if something was burning, or if it was maybe a gas leak or something along those lines.

We walked around for 10ish minutes, and then decided to call President and Sister Warne (they were in Greece this week checking up on missionary progress there), but they didn't answer. So then we had to go find and wake up (it's about 12:00 now) the Atkinses, the first counselor for the MTC who was staying over in case of emergency. They woke up and came upstairs and agreed that it smelled weird, and decided to call security to have them come check it out. Long story short, turns out they were resurfacing the highway right next to the MTC, which is why it smelled like burning rubber. Nonetheless, let it be known that my companion and I were ready to save the MTC. That would have been a good story!

2) We had the coolest opportunity to go to the heart of Manchester yesterday and for 2 and a half hours be real missionaries, not just the 'training' ones. Lol just kidding. But for real, so hard but so cool! For the first 30 minutes, we walked all around the city trying to talk to people and people don't care to stop and listen! People blow cigarette smoke in your face! People put headphones in when they see you! People tell you to "jog on" and other things along those lines! People literally run past you to try and avoid you! It was so hard!

Not gonna lie, after 30 minutes Sister N was feeling super discouraged and I was starting to get there (I'm trying to have such a positive attitude and it's going pretty well so far) so we decided to stop, find somewhere private and pray. We found this little menswear store that was totally dead (the clothes were ugly and expensive) and we ran inside and said a quick prayer. We then pulled out our Books of Mormon and we just went out and would not let people pass us by! If people walked past us, we would walk after them with our hands out so they had to stop to shake our hand. If someone told us they were on their lunch break and they only had a few minutes, we told them that was great, our message was only a few minutes as well! If we saw someone on crutches, or with a walker, we ran over to talk to them because they couldn't get away from us quickly (we repented for this afterwards). But for real, after we prayed and believed that we could talk to people, we did! It was the coolest and neatest thing ever.

My favorite person we talked to was this super old guy named Winston who moved from Jamaica 40 years ago. He was so nice to us, and he blessed us with love and peace and took a Book of Mormon because he thought we were nice people. But when we tried to talk to him more about the gospel he just said, "You guys preach good stuff to the wicked people. But I am a good man so...." then he shrugged and laughed.

Such a cool experience and I am so pumped to get out of the MTC but not really.

3) Conference at the MTC. So cool. We got to watch it live, which was awesome, even if it meant we were watching the morning session at 5 PM. We also got to watch Women's Conference on Sunday, because they had it taped so we got to watch everything! Conference was so good, and I loved a lot of talks but one of my favorites was Elder Budge’s about finding joy. Very good and I liked it lots.

4) Haha so this super bad cold has been going around the MTC like wildfire because it's so small, and Sister N and I have been religiously washing our hands and taking vitamins every day, but lo and behold, Saturday night I felt absolutely terrible. I woke up Sunday and was like - nope. So Sunday morning I got to sleep in until about 11 and then I got to take a bunch of nasty medicine and then go watch Women's Conference. I feel much better, but a huge tender mercy that came out of that cold was that I didn't have to give a talk in sacrament meeting. Every week, everybody has to write a 3 minute talk for sacrament meeting, and at the beginning of the meeting, President Warne announces who will be speaking. Funnily enough, I got called to speak that morning, but because I wasn't there, Sister N had to give her talk instead of me. Heavenly Father watches out for his children.

That's all for this week that's super exciting! I love it here and I'm so grateful.

Favorite food from the week: Twirl chocolate bar from Manchester
New saying: jog on. It wasn't said nicely but it made me laugh.

Pics: 5/6 of the cute sisters in our district (top of page), some other people at the MTC I love, me in all of my beautiful glory, and me and Sister N braiding sister Matevasi's hair.

Click on any of the photographs to see them in their original size.
Also, you can access more photographs in the 'photographs' section above. 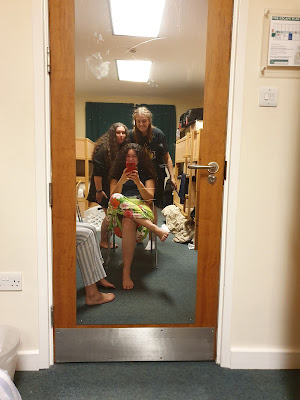